Bertha has broken through. After nearly four years underground, Seattle’s beleaguered boring behemoth clawed its way into daylight yesterday, leaving a 1.7-mile tunnel behind it. And now that its job is done, workers can at last move an aging, potentially dangerous stretch of elevated highway below the surface, and build a new public space on Seattle’s waterfront in its place.

The tunneling machine, named for former Seattle mayor Bertha Knight Landes, boasts a 57-foot diameter and measures 325 feet long. After dropping into a pit in July 2013, it started digging the tunnel that will hold the replacement for the Alaskan Way Viaduct, an elevated highway that was demolished after being damaged by a 2001 earthquake.

Bertha’s job was supposed to take two and a half years, but in December 2013, disaster struck: After just 1,000 feet of work, temperature spikes inside the machine set alarm bells ringing, and Bertha had to stop. The contractor says an 8-inch steel well casing, a bit of pipe, basically, fouled the cutting tools and damaged the blades at the front. (Washington State disagrees on the cause; lawyers are fighting it out.) 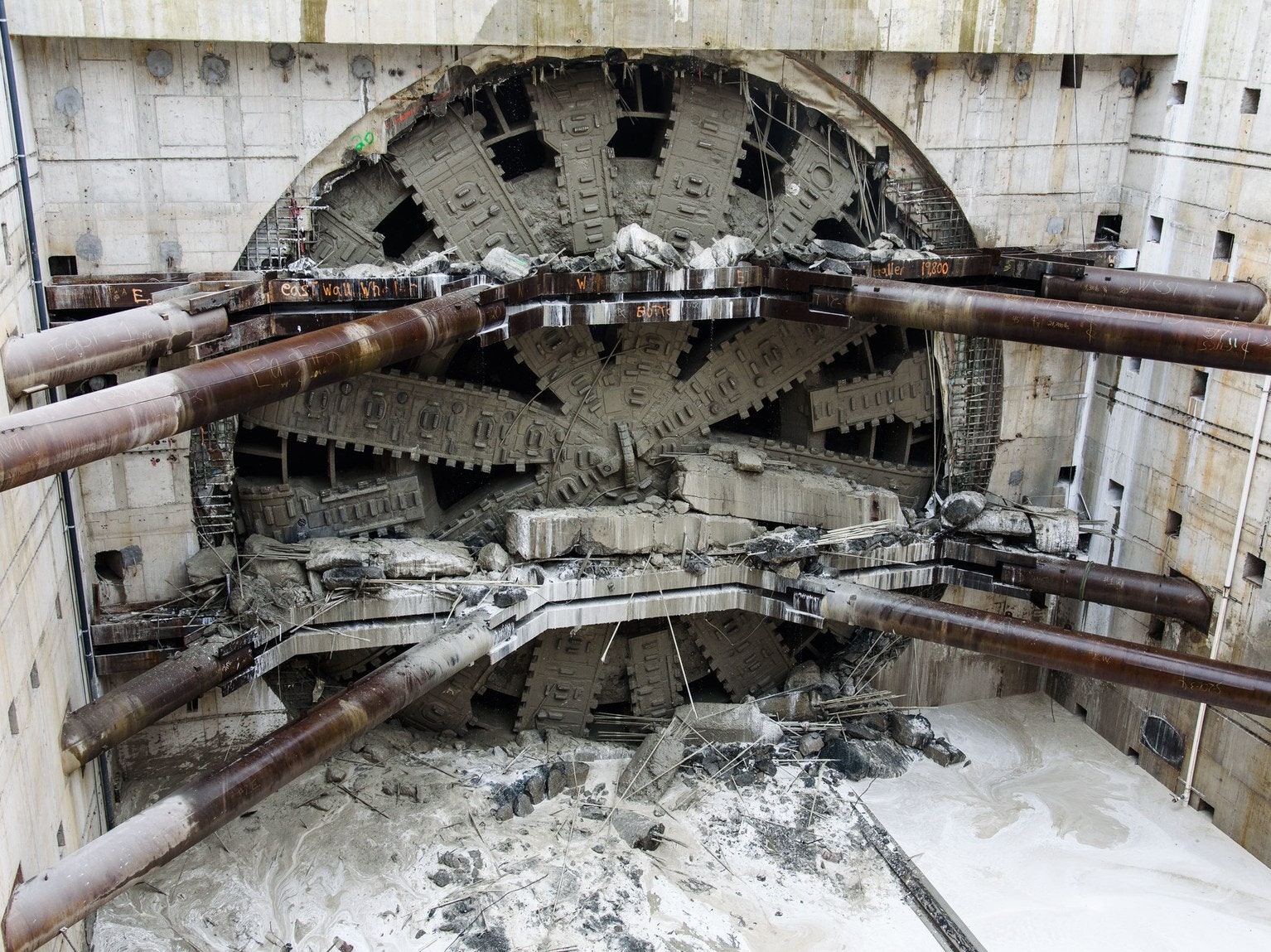 The only way to fix the blades was to dig down 120 feet to where Bertha was stuck, pull the cutting head up to the surface, and do repairs on site. That took technicians two years, but they finally sent Bertha on its way again in December 2015. And on Tuesday, it finally gnawed through the concrete wall of a newly constructed, 90 feet deep, ‘disassembly pit’.

Now, workers will cut 6,100-ton Bertha into about hundreds of 20-ton pieces, so they can crane them out and truck them away. They’ll decide if parts can be salvaged for use on other projects, or if they should be recycled. No surprise, that’ll take several months. (Dismemberment beats being buried alive: After a 200-ton tunneling machine finished its work under New York City, workers abandoned it instead of hauling it back up.)

This breakthrough is just the start. Now construction crews have to finish a double deck highway inside the 60-foot diameter tube, complete with lighting, ventilation, and fire detection systems. Washington State’s Department of Transportation says inspectors will test more than 8,500 components over the next two years, before signing off and letting traffic through.

Bertha’s journey has been a slow one, even when compared to other boring projects. London carved 23 miles of tunnels under the city for a new Crossrail train in just three years, using eight machines. And serial entrepreneur and traffic hater, Elon Musk says he can find a better way to build tunnels, which he sees as a way to increase road capacity. He is digging a test trench outside the HQ of his company SpaceX in Los Angeles, and while he admits “We have no idea what we’re doing,” he says he hopes to increase the speed of tunneling by 500 to 1,000 percent. Eventually he’d like to see a network of tunnels up to 30 layers deep under cities, with traffic whizzing in three dimensions, instead of just two on the surface.

Musk may want to look at Seattle for a reality check on the difficulties of working underground. The $2 billion Alaskan Way Viaduct replacement in Seattle is now slated to open in early 2019, fully three years behind schedule. But hey, at least there’s now light at the end of the tunnel.